Seniors discover the power of writing 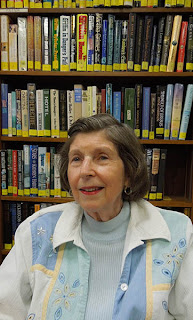 When 82-year-old Dorothy Rutledge decided to start writing, a character came to mind: her great-Aunt Leah. I’ll let Rutledge tell you about her.
“When I was a child, the few times I saw Aunt Leah I was quite intimidated by her,” Rutledge wrote during a Spring 2012 writing workshop held in the library of Springmoor Life Care Retirement community in North Raleigh.

“She was rather plump, dressed in a long black dress, black stockings, and black laced-up shoes, and she had a strong, commanding voice. She carried her Bible with her everywhere she went. She frightened me somewhat – even though I knew she was very religious.”

In her writings, Rutledge recounts a story of her aunt’s. Two men came to Tuscaloosa, Ala., where Aunt Leah lived, looking for prostitutes. A local man who knew Leah decided to play a joke and told those two men where they might find a house of ill repute – at Aunt Leah’s home. The men went to the house, knocked and Aunt Leah answered. They told her that they both wanted a woman, and Leah, unruffled, bade them come in and sit. She disappeared and returned shortly with a Bible...[keep reading]
Posted by Springmoor News at 4:47 PM